Skipton became a railway town in 1847 when the Leeds-Bradford-Keighley Railway was extended, soon joined by the Lancashire and Yorkshire Railway from Manchester.

A year later, the line was extended to Colne and initially, passengers would leave the train at Skipton for onward travel to the villages in Wharfedale by horse-drawn coach. Hostelries are still clustered around the station, including the historic Herriots Hotel.Within two years of opening the station, the ‘Little North Western’ Railway opened a line from Skipton to Ingleton on 30 July 1849 (later extended to Lancaster and Morecambe). 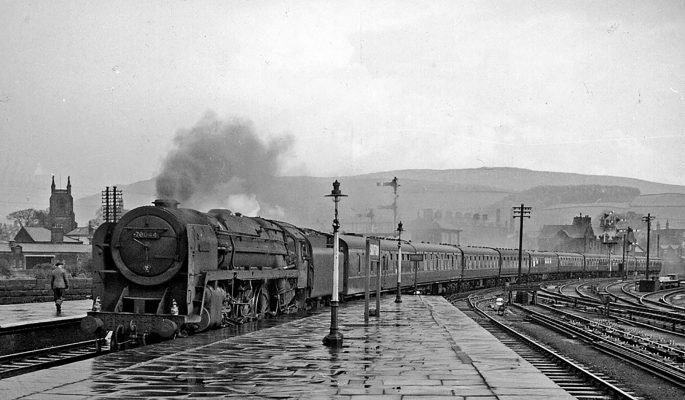 In 1876 the Settle-Carlisle line was opened providing a main line between London St, Pancras and Glasgow Scotland, and a new station was built. By the end of the century the ancient high-level roads for pedestrians and animals had almost gone out of use, as low-level routes -canal, rail and road-competed for transport business.

The same high-level routes are now an important landscape feature as recreational footpaths. It took another decade before further expansion came with additionalplatforms 5 and 6 built to serve the Skipton to Ilkley Line. These platforms were also later used by the Yorkshire Dales Railway, a short branch to Grassington from 1902 to 1930. Passenger services to Ilkley ceased on 22 March 1965, after which platforms 5 and 6 were closed to passengers and their access subway was bricked off.

The line to Colne closed on 2 February 1970 and its tracks have since been lifted. An organisation called Skipton and East Lancs Rail Action Partnership( SELRAP) is campaigning forthe re-instatement of the link and runs occasional charter trains between the two stations, using a long diversionary route to point out the eleven mile ‘missing link’.Today, Skipton Train Station serves as a popular commuter line into Leeds with several trains running every hour.